This week I have been feeling very motivated in terms of my blog and university work. (Yes I do realise it's only Wednesday. Don't burst my bubble!) But when it comes to feeling overwhelmed and letting the stresses of work demands get to me, I am very easily controlled by my negative thoughts and uneasy emotions. It really is one of my worst feelings, to feel so buried underneath to do lists and assignments, that it starts to get in the way of everyday life.

Lately though, I have been focusing a lot on what is actually going on inside me. As in, listening to my needs. Hopefully you've read my 'Living with Anxiety' post, because that might explain a little bit more. If not, I understand that it might sound strange, but if you think about it we are normally so focused on getting things done as soon as possible that we don't take into consideration what we feel at that exact moment. This is something that has been helping me to really get going with the things I need to tick off my list, and essentially the reason for this post. Setting goals is a way in which you can centre yourself and focus on what it is you really want or need to achieve. And believe me, the feeling of accomplishing a goal is one of the greatest motivation fuels ever.

If you're anything like me, when you have too many things to do and it feels as though everything keeps piling on, you completely distance yourself instead of thinking reasonably. On Monday though, something changed for me. It was literally like a revelation.. I know, weird! But I was sitting at the table in the morning and I started writing out my goals for the week and goals for the day. This usually is not something I do - normally I make to do lists (like any other list-crazed person does) but I don't physically set myself goals on paper. And why have I never done this before, you might ask. Well, personally I think the idea of writing down goals can be quite intimidating - what if you don't accomplish them, what if they change constantly, or what if you just completely forget about them? I am quite possibly overthinking this (I know I am) but what can I say, it's what I do!

The gist of the story is that writing down goals became a game-changer for me in less than a day! So naturally I decided to talk about it here...

It may be pretty obvious that some goals will be bigger and take longer to achieve than others. This takes away some of that first fear of not accomplishing them, because you'll be able to be reasonable (hopefully) about how much time you'll need for what. I mean, if you set yourself up for failure in the beginning, you're most probably not going to feel that great. So try avoid that at all costs!

I know this isn't rocket science, but sometimes we need a little guidance. If it's taken me 21 years to finally write down goals, I can't imagine I'm the only one. Although I'm definitely not saying I've never had goals in my head, but I'll get to that.

These are the biggest goals because you'll have the most time to accomplish them. They can be anything that works for you in the timeframe. As I said though, it has taken me a while to get this down. However, I have always had an idea of the things I'd have liked to accomplished by certain ages and whatnot, but they've always been in my mind. My mom used to tell me to write down the things I want. The moment you see it written down, you visualise it, and the moment you visualise it, you start to attract it into your life. She was definitely right, as I have eventually realised for myself!

These will undoubtedly be smaller than the yearly goals. For me, I would put things like: 'post ten blogposts' and 'finish however many course modules this month', or goals along those lines. The thing is they don't have to be huge and extravagant, rather consistent with your own life, needs and capabilities. Also, if they're too impossible, it really will feel disappointing. The whole point of monthly goals is to get ahead in areas that you need to, over a longer period than a day. Honestly, it feels extremely rewarding.

These are my favourite goals to write down now because they make me feel so productive and if I've completed all of them at the end of the day, it really feels amazing! As I mentioned in the beginning of the post, on Monday I set out a list of things I wanted to achieve by the end of the day, and having done that I seriously felt so motivated. It was strange because I hadn't planned to take time out to think about goals I wanted to achieve. Even something as small as taking the photos for this blogpost (not that it didn't take some setting up and making tea!) was one of my daily goals. And by the time I got round to actually doing it, I was tired from work and finishing off assignments, but I just pushed myself because I knew that I wanted to get it done and I knew the goodness I would feel knowing that I could write the post a few days later.

Writing goals seems all good and well for a while, but the hard part is keeping up that motivation. I'm not really one to talk, because often I have down days where I just don't feel like doing anything, let alone writing out goals! But like I said, I have been trying to focus more and more on what I feel in the moment and listening to what I need. It really helps. I have started to change around the way I think, moving away from getting quickly upset with myself for not feeling that motivation, to a calmer approach where I literally just think about what's upsetting or stressing me.

I'm no stranger to letting things tense me in a second, but slowly moving through my head, one troubling task at a time, I have come to realise that this makes you approach things more reasonably. Don't believe me? Try it!

It's like we go through cycles in life, or at least I do. These cycles cause me to feel extremely motivated one minute and the complete opposite the next. But writing my goals down is definitely something that I can feel is going to have a long-lasting positive impact. And with each completed goal, you seriously feel ready to tackle the next one! I am very ready to achieve all of mine now.

Us list-nerds must be onto something good, don't you think? 😉

I would love to know what your goals and motivation tips are! Please share them or let me know if you have similar thoughts to me? 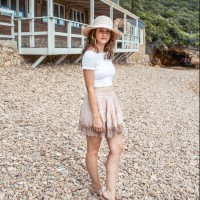